From Ugab we drove on to Camp Kipwe in Twyfelfontein – named ‘doubtful spring,’ after the white farmer who settled here in the ‘forties, and who evidently would tell his guests, whenever they visited, that he was doubtful that the water would flow that year. I guess he was right more often than not.

Camp Kipwe was where we would round off our visit to Namibia – and in style, folks, in style! Kipwe is every bit as fabulous as it looks: blended into the huge red boulders of which it seems to form part, it is the epitome of ‘glamping’ – the kind of luxurious, ‘Out of Africa’ chilling that Rob and I only wish we could become accustomed to.

But for three nights, on a special deal, including two drives into the desert (more on this in another post) it was fabulous, and in dollars at least, relatively affordable.

Where Etosha was, for the most part, very much the Earth, post climate-change: flat and arid, painted with a palette of grey-greens, browns, chalk and charcoal, Twyfelfontein was from Mars, the red planet, a world of alien beauty – rocks, boulders, mountains, plains. And desert elephants, of which you will read in a future blog post.

Here in the meanwhile are some images: another landscape from Ugab, two landscapes from Camp Kipwe, and black and white photos of a tree, thrusting out of the boulders, and the Twyfelfontein Organ Pipes, cliffs of fractured dolomite columns that follow the course of a dry river bed. 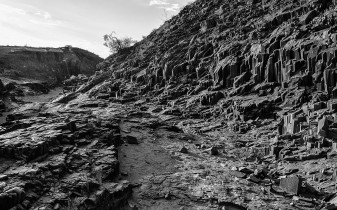