Memory cards were expensive, back in 2006; even with my 5 megapixel Nikon D50 I had to worry about space, on a three-week road trip into southern Namibia. So many of the photos I took I took in jpeg, rather than RAW (I shoot only in RAW nowadays) with an all-too-obvious impact on quality. In the case of the salt pan, near Luderitz, and the picture of the quad bikes on the dunes outside Swakopmund, this might even work to their advantage, however. ‘Taste the Good Times’ was shot in RAW, on the other hand – but the way I’ve treated the image gives a similar effect.

It’s all about what you’re trying to create. 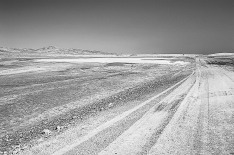